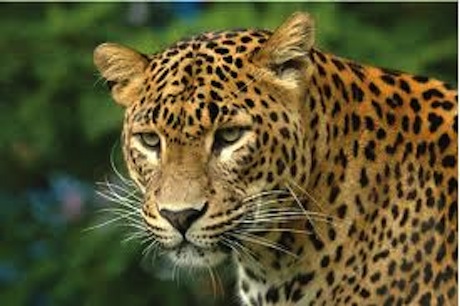 This column comes to you from sunny Rajasthan, India, where I have taken my family to look for leopards (and crocodiles and monkeys and black buck…).

As you can imagine taking the kids somewhere so exotic at half term is costing me an arm and a leg I can ill afford. But I want them to share with me the almost matchless pleasure of seeing big cats (or big anything else: sharks are good too; and bears; and elephants…) in their native habitat. Being amid unspoilt nature, whether it’s walking in the Welsh or Scottish hills or going on safari in Africa or India, is what makes me truly happy, and I’m sure this will rub off on my miserable, ungrateful, ‘urrggh it’s spicy we hate spicy food isn’t there a Pizza Hut round here?’ kids eventually too.

Why am I telling you this? Well partly in response to the unutterable fatuousness of some of the comments I got last week below my post on ‘Biodiversity.‘ Some of the pillocks who chipped in their tuppeny happeny’s worth seemed to imagine that the world divides into two kinds of people:

Lovely, cuddly-wuddly, caring, WWF and Greenpeace types who want to save nature.

Uh, no. With respect, morons, that is not how things work. When I attack the concept of ‘Biodiversity’ – and note the inverted commas, that’s kind of key – I’m not voting, as the eco-fascist would-be suicide bomber James Lee so touchingly put it, against “The Lions, Tigers, Giraffes, Elephants, Froggies, Turtles, Apes, Raccoons, Beetles, Ants, Sharks, Bears, and, of course, the Squirrels.” What I’m railing against is the way a noble-seeming concept has been subverted by the watermelons of the green movement in exactly the same way as “Climate change” has and with precisely the same aims: to extend the powers of government; to raise taxes; to weaken the capitalist system; to curtail personal freedom; to redistribute income; to bring ever-closer the advent of an eco-fascist New World Order.

I’ve got nothing against biodiversity. But I’ve an awful lot against “Biodiversity.”

To understand why it’s such a menace, download this PDF put together by the wonderful Donna LaFramboise. Her basic point is this: that the claims of mass man-made species extinction currently being bandied about by liberal activist bodies like the United Nations and the BBC are based on the flimsiest of science.

A few days I ago I wrote about the chapter in the 2007 Nobel-winning climate bible that concludes 20-30% of all the Earth’s species are at risk of extinction due to global warming. I explained that the research paper on which this finding depends has been demolished by experts in that field. According to one of the world’s pre-eminent biologists, the 2004 Thomas study isn’t just flawed it’s “the worst paper I have ever read in a major scientific journal.”

LaFramboise also recommends this essay by Stephen Budiansky, which concludes:

There is no scientific dispute that extinctions are occurring, that they are occurring at a rate above the natural level due to human action, and that strenuous efforts are needed to protect critical habitats, to eliminate invasive competitors that threaten species, and to prevent overexploitation.

But the egregiously bad science that is still being invoked to shore up wholly unsubstantiated predictions of catastrophic mass extinctions is only undermining the credibility of environmentalists, and is already causing a dangerous political backlash that has handed ammunition (exactly as in the case of global warming) to those who want to reject any and all evidence of human impacts on the natural environment.

Are you with me now?

Biodiversity is climate change is ocean acidification is welcome to the New World Order.