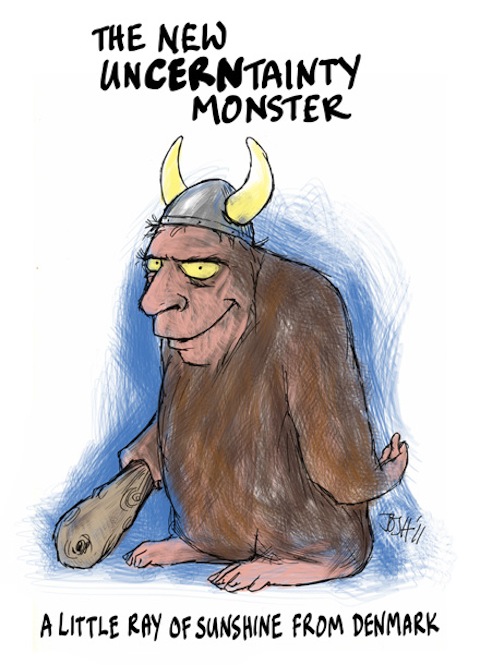 If Michael Crichton had lived to write a follow-up to State of Fear, the plotline might well have gone like this: at a top secret, state of the art laboratory in Switzerland, scientists finally discover the true cause of “global warming”. It’s the sun, stupid. More specifically – as the Danish physicist Henrik Svensmark has long postulated – it’s the result of cosmic rays which act as a seed for cloud formation. The scientists working on the project are naturally euphoric: this is a major breakthrough which will not only overturn decades of misguided conjecture on so-called Man Made Global Warming but will spare the global economy trillions of dollars which might otherwise have been squandered on utterly pointless efforts to reduce anthropogenic CO2 emissions. However, these scientists have failed to realise just how many people – alarmist scientists, huckster politicians,  rent-seeking landowners like (the late Michael Crichton’s brilliant and, of course, entirely fictional creation) the absurd, pompous Sir Reginald Leeds Bt, green activists, eco-fund managers, EU technocrats, MSM environmental correspondents – stand to gain from the Man Made “Climate Change” industry. Their discovery must be suppressed at all costs. So, one by one, the scientists on the cosmic ray project find themselves being bumped off, until only one man remains and must race against time to prove, etc, etc…

Except of course in the real world the second part wouldn’t happen. No one would need to go to the trouble of bumping off those pesky scientists with their awkward, annoying facts and their proper actual research. That’s because the MSM and the scientific “community” would find it perfectly easy to suppress the story anyway, without recourse to severed brake cables or ricin-impregnated hand-washes or staged “suicides”.

This is exactly what has happened with the latest revelations from CERN over its landmark CLOUD experiment, whose significance Lawrence Solomon explains here:

The science is now all-but-settled on global warming, convincing new evidence demonstrates, but Al Gore, the IPCC and other global warming doomsayers won’t be celebrating. The new findings point to cosmic rays and the sun — not human activities — as the dominant controller of climate on Earth.

The research, published with little fanfare this week in the prestigious journal Nature, comes from über-prestigious CERN, the European Organization for Nuclear Research, one of the world’s largest centres for scientific research involving 60 countries and 8,000 scientists at more than 600 universities and national laboratories. CERN is the organization that invented the World Wide Web, that built the multi-billion dollar Large Hadron Collider, and that has now built a pristinely clean stainless steel chamber that precisely recreated the Earth’s atmosphere.

In this chamber, 63 CERN scientists from 17 European and American institutes have done what global warming doomsayers said could never be done — demonstrate that cosmic rays promote the formation of molecules that in Earth’s atmosphere can grow and seed clouds, the cloudier and thus cooler it will be. Because the sun’s magnetic field controls how many cosmic rays reach Earth’s atmosphere (the stronger the sun’s magnetic field, the more it shields Earth from incoming cosmic rays from space), the sun determines the temperature on Earth.

So if it’s so great, why aren’t we hearing more about it? Well, possibly because the Director General of CERN Rolf-Dieter Heuer would prefer it that way. Here’s how he poured cold water on the results in an interview with Die Welt Online:

I have asked the colleagues to present the results clearly, but not to interpret them. That would go immediately into the highly political arena of the climate change debate. One has to make clear that cosmic radiation is only one of many parameters.

Nigel Calder, who has been following the CLOUD experiment for some time, was the first to smell a rat. He notes:

CERN has joined a long line of lesser institutions obliged to remain politically correct about the man-made global warming hypothesis. It’s OK to enter “the highly political arena of the climate change debate” provided your results endorse man-made warming, but not if they support Svensmark’s heresy that the Sun alters the climate by influencing the cosmic ray influx and cloud formation.

One could perhaps understand if all scientists were similarly gagged and prevented from interpreting the results of their research in ways that could be relevant for policymaking. However, the main problem is that many people who are trying to work on very different phenomena in the climate are not prevented from interpreting – and indeed, overinterpreting and misinterpreting – their results that are often less serious, less reliable, and less rigorous, perhaps by orders of magnitude, than the observations by the European Organization for Nuclear Research.

Moreover, this sentence by Heuer

One has to make clear that cosmic radiation is only one of many parameters.is really a proof of his prejudice. Whether the cosmic radiation is just one player or the only relevant player or an important player or an unimportant player is something that this very research has been supposed to determine or help to determine. An official doesn’t have the moral right to predetermine in advance what “one has to make clear” about these a priori unknown scientific results.

But then, as Lawrence Solomon reminds us, this was never an experiment the scientific establishment wanted to happen in the first place.

The hypothesis that cosmic rays and the sun hold the key to the global warming debate has been Enemy No. 1 to the global warming establishment ever since it was first proposed by two scientists from the Danish Space Research Institute, at a 1996 scientific conference in the U.K. Within one day, the chairman of the Intergovernmental Panel on Climate Change, Bert Bolin, denounced the theory, saying, “I find the move from this pair scientifically extremely naive and irresponsible.” He then set about discrediting the theory, any journalist that gave the theory cre dence, and most of all the Danes presenting the theory — they soon found themselves vilified, marginalized and starved of funding, despite their impeccable scientific credentials.

The mobilization to rally the press against the Danes worked brilliantly, with one notable exception. Nigel Calder, a former editor of The New Scientist who attended that 1996 conference, would not be cowed. Himself a physicist, Mr. Calder became convinced of the merits of the argument and a year later, following a lecture he gave at a CERN conference, so too did Jasper Kirkby, a CERN scientist in attendance. Mr. Kirkby then convinced the CERN bureaucracy of the theory’s importance and developed a plan to create a cloud chamber — he called it CLOUD, for “Cosmics Leaving OUtdoor Droplets.”

But Mr. Kirkby made the same tactical error that the Danes had — not realizing how politicized the global warming issue was, he candidly shared his views with the scientific community.

The global warming establishment sprang into action, pressured the Western governments that control CERN, and almost immediately succeeded in suspending CLOUD. It took Mr. Kirkby almost a decade of negotiation with his superiors, and who knows how many compromises and unspoken commitments, to convince the CERN bureaucracy to allow the project to proceed. And years more to create the cloud chamber and convincingly validate the Danes’ groundbreaking theory.

Still, as you’d expect, the BBC remains dutifully on-message.  Read this report by its science correspondent Pallab Ghosh and you’ll be left in little doubt that a) the latest results are dull beyond measure  and b) that if they do mean anything at all, it’s that global warming is still very much man-made. Here’s their tame expert, Reading University’s Dr Mike Lockwood, on hand to provide them the perfect pull-quote:

Does this mean that cosmic rays can produce cloud? – No”

PS Welcome to all you American readers brought here by Drudge. Please come again. And if you want to read more about how the environmental movement got so powerful, how the junk scientists got away with it for so long, and why so many people fell for the biggest most expensive scam in history, you might enjoy my new book on the subject – Watermelons: the Green Movement’s True Colors. (Also available on Kindle)

Previous Previous post: An open letter from my old mate David Cameron to the people of BritainNext Next post: After Libya: where should Cameron strike next?