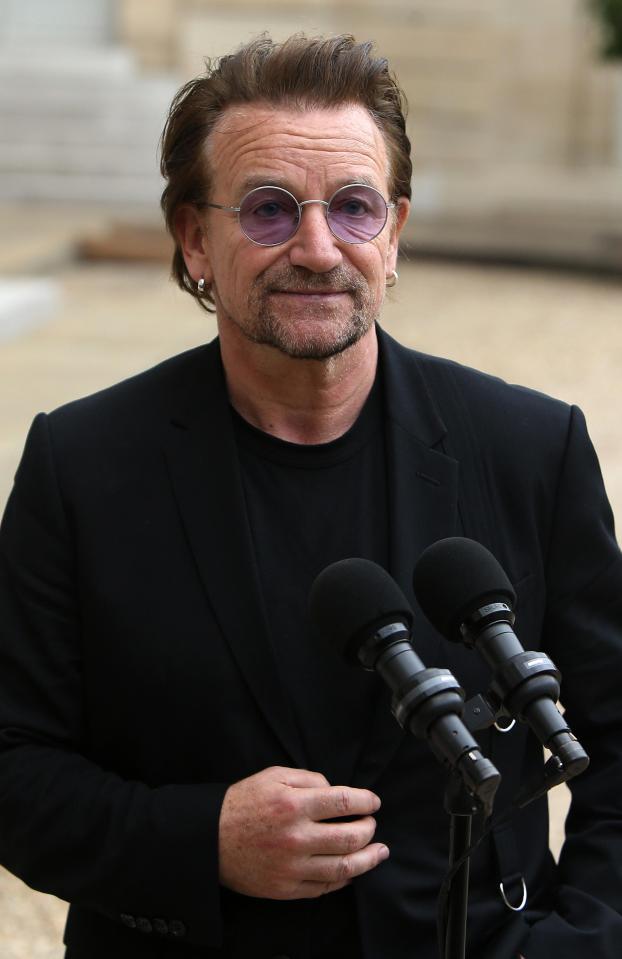 I can forgive U2 singer Bono for tax dodge but not his hypocrisy — after the star was exposed in the Paradise Papers data leak.

With luck, other dreadful celebrities thinking of doing the same thing will learn a lesson from this scandal.

If the greatest pop music is the most personal, then Bono’s next U2 album should be a cracker.

He will no doubt write about something close to his heart — avoiding tax.

As always, the humble Irishman will be keeping it real by telling a story we can all relate to.

It’s about an ordinary guy, born Paul Hewson, best friend of popes, prime ministers and presidents, and his heroic mission to save the world and his near-billion dollar fortune by sheltering it in ingenious offshore accounting schemes including a shopping centre in Lithuania, bought via low-tax Malta.

Bono is one of the celebrities exposed in the Paradise Papers data leak. Like last year’s Panama Papers, it involves the release of private documents detailing some of the tax avoidance schemes used by the rich and powerful.

— and created a £1TRILLION-a-year green industry that bullied experts who dared to question the figures.

The scientists who produce those doomsday reports for the Intergovernmental Panel on Climate Change finally come clean. The planet has stubbornly refused to heat up to predicted levels.

Not pneumonoultramicroscopicsilicovolcanoconiosis (inflammation of the lungs caused by inhalation of silica dust). Nor palmitoyloleoylphosphatidylethanolamine (a lipid bilayer found in nerve tissue).

No, the actual hardest word — which scientists use so rarely it might as well not exist — is “Sorry”.

Which is a shame because right now the scientists owe us an apology so enormous that I doubt even a bunch of two dozen roses every day for the rest of our lives is quite enough to make amends for the damage they’ve done.

Thanks to their bad advice on climate change our gas and electricity bills have rocketed.

So too have our taxes, our car bills and the cost of flying abroad, our kids have been brainwashed into becoming tofu-munching eco-zealots, our old folk have frozen to death in fuel poverty, our countryside has been blighted with ranks of space-age solar panels and bat-chomping, bird-slicing eco-crucifixes, our rubbish collection service hijacked by hectoring bullies, our cities poisoned with diesel fumes . . .

And all because a tiny bunch of ­scientists got their sums wrong and scared the world silly with a story about catastrophic man-made global warming.

These are the same sort of people who dismiss Brexit voters as gullible misled thickos.

This is a phrase I encounter a lot on social media, especially the first, I notice, as I get older and balder.

And whenever I do, 99 times out of 100 I can be sure of one thing: That the person speaking is one of those sensitive, enlightened, progressive types who claim to hate “personal abuse” and to believe in a “kinder, gentler politics”. Just like their hero Jeremy Corbyn.

The key thing about this insult is it doesn’t advance any kind of intelligent argument. Like the T-shirt that apparently sells like hot cakes at Corbyn rallies, the one that quotes Nye Bevan saying Tories are “lower than vermin”, their purpose is to dismiss people you disagree with as being such hateful scum they don’t even count as humans.

You could detect exactly this ugly mix of preening superiority and poisonous disdain in the comment posted on social media this week by aspiring “artist” Hetty Douglas. Douglas’s photograph, taken in McDonald’s, featured three scaffolders queuing and was captioned: “These guys look like they got 1 GCSE”.

In order to protect the £2.25million salary of an irritating millionaire, squads of bullies are paid to hunt down those who don’t pay the unfair fee.

WOULD you rather go to prison than contribute to Chris Evans’ next vintage Ferrari?

Preposterously, this is a genuine choice.

Suppose last year you accidentally watched his brief, disastrous stint as ­Jeremy Clarkson’s replacement on Top Gear, and suppose in disgust you had refused to pay your £147 BBC licence fee.

First you’d have been given a fine of up to £1,000 — and if you still couldn’t, or wouldn’t, cough up then next you’d face a stint behind bars and a criminal record.

Is this fair? To anyone outside Britain, it’s not just unfair but sheer insanity.

The marvellous thing about our ancient justice system, we’re always told, is that it protects rich and poor without fear or favour.

Yet here we have a situation in which, in order to protect the £2.25million (approx) salary of an irritating millionaire, squads of bullies are paid to hunt down defaulters with such aggression and zeal you’d think they were hunting fugitive serial killers.

They should follow the lead of the Queen who always puts the job and country first. These entitled younger royals could learn from her Majesty, 91, attended 332 official engagements last year.

PRINCE HARRY says that no younger member of his family wants to be king or queen. My heart bleeds.

God knows it can’t be easy living in a palace and having all the world’s hottest models chasing you while you drink vintage Krug till the small hours in the VIP zone of nightclubs. Or taking holiday after holiday from Canada to Las Vegas and breezing through security.

Nor does 32-year-old Harry ever have to worry about ­getting a foothold on the ­property ladder, sorting out a pension, how he could afford to care for elderly relatives or find the right school for his children.

If being born into a life of luxury, extreme privilege and wealth in the world’s premier royal family were our unfortunate lot, I think most of us might be able to cope without ­blubbing every few days about just how hideously unlucky we’d been.

The internet is predictably outraged but in reality trillions are being squandered on a plan which by 2100 will have only reduced global temperatures by 0.17 degrees.

IN the last 48 hours the internet’s head has exploded after President Trump’s decision to take the US out of the Paris climate agreement.

Comments included calling it a “traitorous act of war”, a “crime against humanity” — and suggesting Trump’s father should have pulled out too.

But the truth is that for several decades now the world has been held to ransom by a bunch of religious crazies.

Most of us, if we’re honest, would put global warming way below issues like jobs, health, schools, law and order, immigration and Islamic terror on our list of worries.

Yet aggressive campaigning by a small but very vocal minority of eco-zealots has seen trillions of Pounds squandered on it.

WHAT does the Prince of Wales most want to be when he finally grows up: A half-baked political activist or a halfway decent king?

He can’t be both, unfortunately, as we’ve just been reminded by the ludicrous playground fight he is trying to pick with the new President of the USA.

But instead of just handing him a signed copy of his new Ladybird book Climate Change — perhaps with “HINT! HINT!” scrawled on it in red crayon — when Trump arrives on his state visit the Prince apparently wants to give him a lecture.

This is likely to go down like a cup of cold sick.

Trump is not known for suffering fools gladly.

Read the rest at the Sun.

IMAGINE if our new Prime Minister Theresa May could wave her wand and achieve the following miracles within five years.

Create 500,000 new jobs, slash our electricity bills, restore British manufacturing, boost our economy, make us richer and stop our energy supplies being held to ransom by Putin, the Arabs, the French and other foreign regimes.

Well, the good news is she can, right now, and doesn’t need magic to do it.

All she needs to do is get fracking — the marvellous technology that extracts shale gas and oil from the ground.

Fracking has worked wonders for the US economy and could do the same for ours.

Shale gas is just as valuable and useful as the natural gas we’ve been harvesting from the North Sea for decades.

The only difference is that, because it’s mixed up with rock sediment, it used to be impossible to recover.

Read the rest at the Sun.