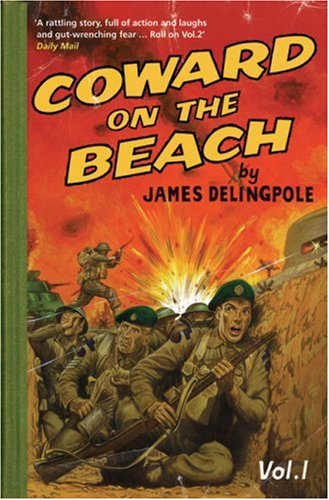 Coward on the Beach is the first in the WWII adventures of Dick Coward, upper class reluctant hero with the Flashman-like knack of appearing in every major military engagement of his lifetime. Here Dick finds himself joining 47 RM Commando in the D-Day landings, fighting through 12 miles of enemy territory, outnumbered, outgunned, to capture the strategically vital Normandy town of Port-En-Bessin.

A new departure for me, military fiction, but not an unexpected one. I live, breathe, eat, sleep World War II–-I watch documentaries about it, read books about it, I’ve even done a bit of re-enacting–and my idea of heaven is spending time in the company of the old boys who were there at the sharp end. So really, this is a case of my turning a hobby into a career.

There will be at least 10 books in the Dick Coward series, covering intrepid Dick’s adventures as an RAF fighter pilot, his time in the Western Desert, his unlikely stint on the Eastern Front fighting for his survival with a German machine gun truppe, and so on. The great thing about World War II is that there was so much of it and in such a rich variety of locations, offering so many possibilities for strange and terrifying adventures for our noble hero.

Dick’s not a coward, by the way. That’s just his surname. He’s like you or I would probably be in a war: i.e., not exactly desperate to die, but even more scared of being shown up as “lacking moral fibre” among his mates. Dick also happens to have an antiquated concept of noblesse oblige, which his cynical, hardbitten, WW1 veteran sidekick (Dick’s ex-riding teacher, and head groom on the estate) Sergeant Tom Price strives perpetually to knock out of him.

You will like if: you’re into World War II, obviously: it’s all very well-researched and there are lots of fascinating footnotes; you like a ripping yarn involving the blackest of black humour, appalling carnage, terror, mayhem, supreme acts of heroism and unlikely scrapes. This is how it was: I get letters from veterans saying: “How on earth did you know?”

You will dislike if: you’re really, utterly, definitely not into World War II. (But even then, I’d say there’s a lot you will like. The comical back story, for example. The love interest involving the flighty Gina.); you’re expecting Flashman. Dick Coward–I repeat–is not Flashman. He is a decent man, not a cad. He doesn’t get as much sex.