St Greta of Thunberg – Patron Saint of the Age of Stupid – has made landfall in the New World, there to preach to the unbelievers her gospel of imminent climate doom.

“The war on nature must end,” she has declared, to anyone who is listening.

Though St Greta has become a figure of huge influence in Europe – feted by Popes, presidents and prime ministers, lauded with uncritical coverage in the mainstream media, put forward for a Nobel Peace Prize – it seems likely that in the United States she will get a more mixed reception.

While the left will most certainly try to shoehorn her into their Green New Deal campaign, the right may be less convinced.

That’s because, unlike a worrying number of their counterparts across the pond, U.S. conservatives understand St Greta’s environmental scare narrative for what it is: a hoax.

If you’re not a fan of Greta Thunberg you are going to LOVE her latest wheeze: sailing across the Atlantic in a 60-foot vomit-machine made up of so much eco-unfriendly carbon fibre she would probably have done less environmental damage if she’d flown by private jet.

The pig-tailed eco activist – recently voted* Official World’s Number One Most Annoying Child – will be leaving Europe from an undisclosed location sometime in August and sailing to the U.S. on a 60-foot racing yacht Malizia II.

It’s being spun as a victory for the environment because even though the boat – fitted with solar panels and underwater turbines – has a diesel engine for emergencies it will attempt to make the journey using wind power alone.

What the publicity blurb doesn’t mention, though, is how incredibly un-eco-friendly carbon fibre is.

German drivers have begun displaying ‘F*** you Greta’ bumper stickers in protest at the world’s most irritating and over-promoted teenage girl.

Greta Thunberg — with her distinctive pigtails and the thousand-yard stare of a girl who can actually see in the air all that evil “carbon” which is supposedly going to destroy the planet — has been feted across the mainstream media as a kind of latter-day Joan of Arc and even nominated as a candidate for a Nobel Prize.

At Glastonbury festival, next to the painting of Sir David Attenborough with a halo round his head, she was celebrated with a painted hardboard cutout with the legend ‘What She Said’.

One is a brainwashed child in pig-tails pushing a hard-left, anti-capitalist agenda which will drive up energy prices, hamper industry with taxes and regulations, destroy jobs, cause the poor and elderly to die in fuel poverty, enrich crony capitalists, and spread lies and fear and fake news about a non-existent problem.

The other is leader of the free world, a longstanding friend and admirer of Britain, an outspoken defender of Western civilisation, who has transformed the US economy, made his people safer and freer, and brought a degree of stability to a dangerous, unpredictable world both as a peacemaker (North Korea) and a scourge of terrorism (Iraq/Syria). 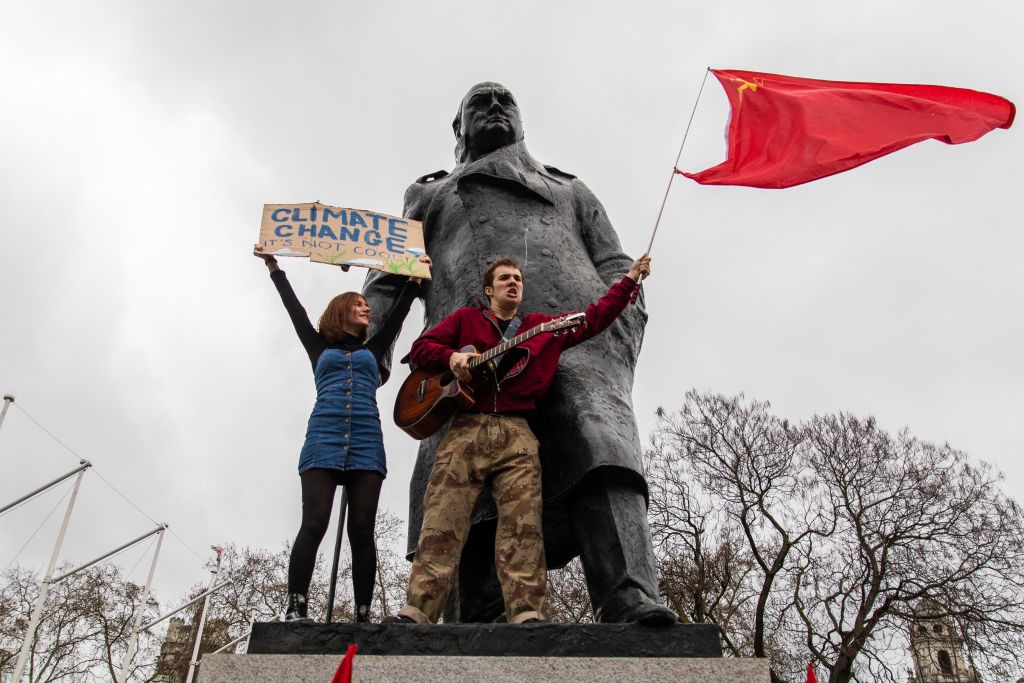 One of the reasons I’m resigned to never getting a column in a national newspaper is that even if you paid me loads I could never churn out commentary as lame as this:

If you have read or listened to some of the teenage campaigners this week or you have some of your own at home, it is clear that the slushy, drippy, apathetic “snowflakes” whom adults love to deride are more impressive, articulate and engaged than many MPs. They are also passionate about their causes rather than their future careers, unlike most of the cabinet.

One of their leaders, Anna Taylor, 17, is sensible rather than sensitive. She has done her homework, engaging with the facts of climate change rather than dismissing them as ‘project fear’ and unlike some of her elders, she doesn’t mock the notion of experts.

I shan’t embarrass the columnist by mentioning his or her name. Suffice to say that I find it difficult to conceive of a notion more air-headed, glib or culturally suicidal than this idea that there’s something admirable, noble or desirable about kids skiving off school to go on climate protests.

This is what thousands of schoolchildren across Britain will be doing this Friday as part of something called Youth Strike 4 Climate. (It was inspired by a pig-tailed Swedish child called Greta Thunberg, of whom more in a moment. Similar protests are being planned from Australia to the U.S.)

If any of my kids attended such an event I wouldn’t find my eyes misting over with pride like that silly columnist. I’d be absolutely bloody furious with them, even more so with their teachers.