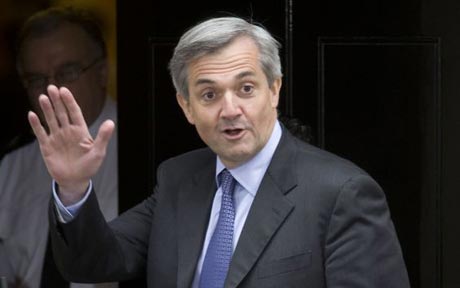 Huhne, shortly after being hit by a falling acorn

Remember those innocent days when we used to worry about whose finger was on the nuclear trigger?

Well much more dangerous now, I’m afraid, is the man with his finger on the nuclear off-button.

You can quite understand the rationale behind his appointment. “All right, so everyone loathes him so we won’t give him a Cabinet seat. But if we don’t give him a purpose he might grow even more unpleasant, so let’s give him the Eco job, where he can throw his weight around and show how much both our parties are united on Climate Change.”

Problem is, the destructive power Cameron and Clegg have put in Chicken Licken’s terrifying claws is far greater than either understands. Huhne now has the ability to bring the British economy to a standstill with his fanatical pursuit of CO2 reduction targets and his equally fanatical opposition to the one form of CO2 free power production that actually works – nuclear.

To those of you who think this is just the ranting of a right-wing AGW-denying headbanger, listen to the wise words of Philip Stott, emeritus professor of biogeography, and avowed socialist:

The lamentable fact that David Cameron has appointed Chris Huhne , Liberal Democrat MP for Eastleigh, Hampshire, as the Secretary of State for Energy and Climate Change, underscores one’s profoundest fears that our leading politicians have still still not grasped, despite all the red flag warnings, the depth and urgency of the UK energy crisis. This, after all, is the man who is avowedly opposed to the development of a new generation of nuclear powers stations, who believes that we can fill our looming energy gap with wave, wind, and waffle, and who is totally uncritical of the ‘global warming’ message.

Or listen, if you prefer, to our own Rowena Mason:

However, there remains a sizeable threat that the Liberals could force a time-consuming and costly public inquiry that delays the new build. The idea that Chris Huhne will have to formulate regulatory policy and set out a timetable for nuclear is likely to be a considerable worry. Most destabilising is the fact that policy will probably not be clear for some time, for Mr Huhne is going to have to square his Department’s theoretical support for nuclear with his own views (in a previous speech on energy) that:

“No private sector investor has built a nuclear power station anywhere in the world without lashings of government subsidy since Three Mile Island and Chernobyl. The World Bank refuses to lend on nuclear projects because of the long history of overruns. Our message is clear, No to nuclear, as it is not a short cut, but a dead end.”

It would be nice to put this disastrous appointment down to mere oversight on Cameron’s part. Unfortunately, this upsetting video suggests very much otherwise. Huhn’s department was one of the first to be visited by the new prime minister, who used the occasion to declare his ambition to build the “greenest government ever.”

Great. So the twin pillars of the Lib Cons’ grand plan for economic recovery are:

1. Stifle entrepreneurship and drive the brightest and best abroad by raising taxes.

2. Deny industry the cheap and reliable energy sources it needs because – without a single piece of solid scientific evidence to back up your theory – you have decided to buy into the hysteria-fuelled myth that CO2 is dangerous.

Clearly there is going to be much suffering ahead. But at least it might be bearable if we knew it was being done as part of a coherent plan to restore Britain’s economic fortunes. The pursuit of a low-carbon economy will do the exact opposite of this.

If I were an investor in Britain Plc, I’d start selling now.