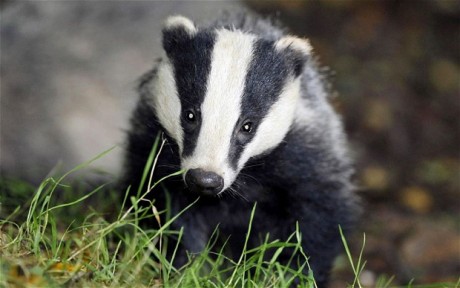 One of last night’s protestors.

I did very much enjoy recording Any Questions in the belly of the beast – aka Eco Loon Central, aka the Centre for Alternative Technology in Machynlleth – this week. But I’m not sure it necessarily had the makings of brilliant radio.

The big problem with radio – as opposed to TV – is that if things start kicking off in the recording venue (as they very much did with last night’s unusually lively audience of yoghurt-weaving yurt-dwellers) there are no cameras to relay what’s going on to the outside world. If you were listening last night – or if you listened to today’s repeat – all you’ll have heard is some background protestations from the audience and the sound of Jonathan Dimbleby trying to keep order.

I think the technical term for what the BBC did with this programme was “trolling.” Step one: arrange to record your panel show in ground zero of green lunacy. Step two: invite one of Britain’s most infamous climate sceptics and one of Britain’s most outspokenly anti-wind-farm, pro-fracking MPs (Owen Paterson – who was partly responsible for effecting the government’s recent policy shift making it easier for groups to oppose wind farms). Step three: light touch-paper and run.

That noise you’ll have heard in the background was partly all the mung-bean-munchers in the audience jeering and hissing me when I expressed scepticism about climate change; but mainly – the real rumpus at the end – was when a small group of anti-badger-cull protestors in the front row tried to hijack the show by loudly shouting insults at Owen Paterson. Annoyingly this was at the very moment when it was my turn to speak about wind farms and I ended up having to shout into my mic so as to avoid being drowned out by the yelling badger huggers.

Anyway, I enjoyed it a lot, as I think Paterson did too. We didn’t feel threatened, the volunteers from the Alternative Technology Centre were all very sweet and welcoming, and of course it’s always tremendous fun getting to tell a bunch of eco loons to their face that they’re a bunch of eco loons – and have it broadcast all over the country.

But I fear that the real – and thoroughly undeserved – losers from all this were the thousands of people all over mid-Wales who are struggling desperately to stop their matchlessly beautiful landscape being destroyed by wind turbines and pylons. Taking the train to Machynlleth on Friday I looked out of the window slack-jawed at the magnificence of mid-Wales’s The-Shire-like hill country which has been rendered more lushly green than perhaps at any time in recent history thanks to the atmospheric abundance of glorious CO2. And the question I kept asking myself is: “How could anyone who really cares about our natural heritage possibly want to destroy this with wind turbines?”

Under current government plans, 800 turbines – some over 400 feet tall – are to be built in mid-Wales, with another 100 miles worth of pylons to be built across Montgomeryshire and into Shropshire in order to connect their expensive, intermittent, unreliable electricity with the national grid. This is going to cost a minimum of £2 billion. Yet, for about one fifth of that cost you can build a gas fired power station capable of producing nearly three times as much power – without blighting the countryside for miles around and without draining the pockets of the poor, put-upon energy user with unnecessary green tariffs.

These people deserve better than to have the cause dearest to their hearts trivialised in the way it was on BBC Any Questions. Given a bit more space and given a more balanced audience, I could have made a much more persuasive case for them. Instead, I was forced to bellow my point, slogan-like, into the mic in the last few seconds before the show closed while the badger protestors were barracking Paterson. Exciting for some us, perhaps, but not really fair on the people who really matter: the thousands of victims of the unconscionable wind energy scam still being forced on them by our Coalition government, the Welsh Assembly and Alex Salmond.

UPDATE: I’ve written some further thoughts on this which I think a few of you might enjoy. There’s a particularly delicious section on one of our house trolls.