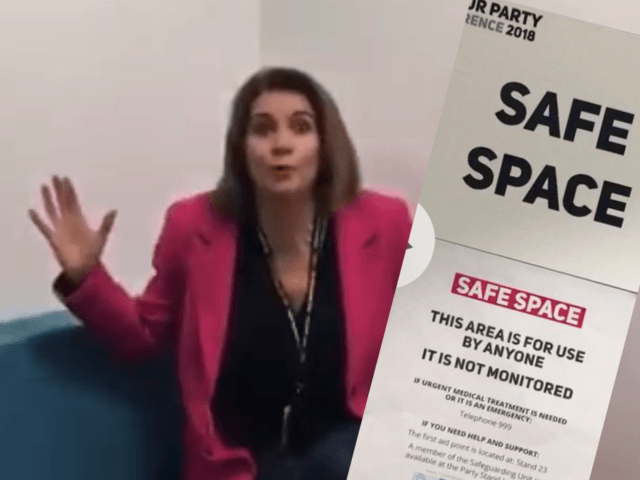 Disability activists have threatened to report TalkRadio host Julia Hartley-Brewer to the police for ‘hate crime’ after she violated one of their designated safe spaces by using the scary word “Boo!” at the Labour party conference.
It sounds like a joke. But the complainants are taking it dead seriously.

According to Disability News Service, which is trying to whip up this confected furore:

[One victim of Hartley-Brewer’s safe space violation] praised the support she was given by Disability Labour and said she was now set to report the incident to the police as a potential disability hate crime.

The other day on BBC Radio 4’s Any Questions, I made a point which unfortunately went right over the heads of my booing audience. It had to do with the way lefties like my fellow panelists Chuka Umunna MP and TUC leader Frances O’Grady too often choose to misrepresent the meaning of perfectly harmless words and language for nefarious political ends.

We were discussing Labour’s confected furore over Lord Freud’s remarks on the disabled. As is now abundantly clear to anyone even halfway acquainted with the background to the story – the fact, for example, that his comments were addressed sympathetically to the father of a severely disabled daughter – Lord Freud’s intentions and meaning were unimpeachably honourable and decent.

So instead his critics resorted to that well-tested lefty fallback position: distortion and misrepresentation. In this case, Lord Freud’s remarks about disabled people being thought by employers to be not “worth the full wage” were twisted so as to mean that he thought disabled people were “worthless.”

This is a weasel trick and when Labour MP Chuka Umunna tried it on Any Questions, I called him out on it. Umunna has his faults but unutterable stupidity is not one of them. Suppose, I put it to him, that he had heard someone in the pub after a rugger match boasting about having “murdered” the opposition. Would he call the police?

Of course he wouldn’t because like anyone born into our richly allusive English-speaking culture he would have understood that our language depends as much on tone and context as it does on the words themselves. That verb “murder” is a perfect example of this. Sometimes, it can indeed mean literally “kill”. But on many other occasions it can mean something innocuous like desperation for a drink (“I could murder a pint”) or abject defeat in a board game (“he murdered me at Scrabble”).

And the amazing thing is that despite the fact that depressingly large sections of our population have low IQs, are functionally illiterate, and are almost totally uneducated thanks to our dumbed-down education system, even the most unutterable thickos among us are yet capable of grasping these semantic nuances – even though they wouldn’t know what a “semantic nuance” was if it bit them on the arse.

So if even the thickest of thick native English speakers can understand basic concepts like the fact that even though “worth less” and “worthless” sound the same but actually mean something different – why can’t a bright, articulate, Manchester- and Burgundy-University-educated, City lawyer like Chuka Umunna?

The answer, of course, is that it suits him not to – in much the same way it suited Nigel Farage’s various lefty-feminist critics not to at the time of his supposedly contentious remarks earlier this year about women in the City.

What Farage said, you may remember, was this:

“And if a woman has a client base, has a child and takes two or three years off work, she is worth far less to the employer when she comes back than when she went away because her client base will not have stuck rigidly to her.”

This is a fairly straightforward economic point which, I’m quite sure, any City employer would tell you (albeit guardedly, lest they seem in any way “discriminatory”) is no more than the ground truth.

Yet the truth was no defence for the likes of Labour MPs such as Harriet Harman who naturally piled in to accuse Farage of saying something he had never actually said: that female employees are, to some degree, “worthless.”

Of course I understand why the Harmans and the Umunnas of the world play this game: it’s a useful way of circumventing the awkward fact that the left rarely has any useful arguments.

But what astonishes me is our cultural tolerance for it…