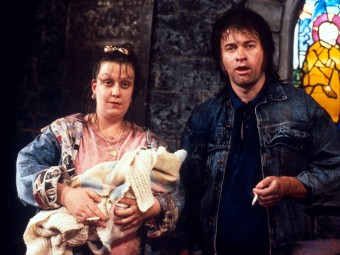 I was going to post on biofuels but they can wait: this glorious piece of unintentional comedy from the BBC News website is too good to miss. (H/T Nicholas Jones)

It analyses what BBC reporter Julian Joyce seems to believe is the heartrending plight of a family in Wales struggling to get by on benefits. Apparently – claims unemployed father-of-seven Raymond (“not his real name” – love that detail!) – if the Government manages to enact its heartless scheme to impose a £26,000 per annum cap on welfare benefits, then it could be a “choice between heating or eating.”

Unfortunately, all sympathy for this family evaporates when Joyce goes into more detail about their budget. We learn, for example, that their weekly shopping bill includes “24 cans of lager, 200 cigarettes and a large pouch of tobacco.” They also spend £32 a week on mobiles and £5 on their Sky TV subscription. But all this is now threatened by the heartless fascist Coalition government: why, if it gets its evil way, then this family’s £30,284.80 annual benefit package will shrink by £82.40 a week!

In case we fail to see why this is very sad, the reporter whips out an onion:

Unemployed father-of-seven Raymond (not his real name) and his family rent a former council house on a social housing estate in north Wales. They do not own a car or take a regular annual holiday.

Raymond, a former educational software writer, has been jobless since 2001. His wife Katherine suffers from bipolar disorder with an anxiety disorder and is unable to work.

Says Ray: “The market for my skills dried up 10 years ago – there’s a total lack of work in my area of expertise.”

The whole piece is such a textbook case study of a) why Britain is completely screwed and b) the prevailing BBC-fomented left-liberal cultural assumptions which explain why we got into this mess and why it’s going to be so hard to get out of it that you almost wonder whether Julian Joyce is in fact not a right wing plant parachuted into the BBC by the Conservative party’s black ops department.

It’s worth reading some of the 600 plus comments below to realise just how badly this sob-story jars with the national mood. Or at least the national mood among that part of the country which actually works for its living.

“They do not own a car or take a regular annual holiday”? I should ruddy well hope not if we’re footing the bill.

“The market for my skills dried up 10 years ago”? Then retrain, you workshy sod.

“Father-of-seven?” Meanwhile in the private sector, hardworking couples think long and hard before having another child, recognising as they do that kids cost enormous amounts of money which they – as respectable people with a work ethic – fully expect to have to pay out of their own income, rather than as the feckless underclass do by spongeing off the state.

“bipolar disorder with anxiety disorder”. Know the feeling, love. I too find myself daily crippled with anxiety about the fact that our economy is tanking, in part at least to the massive burden being placed on it by people with convenient mental problems which render them “too ill” to work. That’ll be why, for example, you never, ever see Stephen Fry on TV do you? Hmm. Stephen Fry whatever happened to him? Oh yes, that’s right. He’s a depressive. He’s got bipolar disorder. He can’t work, can he? Hasn’t done for years…